Nell, a young Husky Collie is brought to the practice with a badly damaged pelvis after being hit by a car. Nell is in chronic pain and needs a total hip replacement. The operation goes well but days after the difficult surgery they suffer a huge setback and with limited options, Noel has to come up with a different plan quickly.

Nell was brought to Fitzpatrick Referrals by Bill, following a serious left hip fracture caused by a car accident a few months previously. The damage was so extreme that Nell’s primary care vet suspected that her only option to get her out of the significant pain she was in was a total hip replacement.  Bill was desperate to find the best solution for his best friend. They do everything together and he wanted her to be given the options to live a pain-free life if it were possible.

Professor Noel Fitzpatrick examined Nell and the chronic pain was obvious. Noel took Nell to have advanced CT scans and X-ray imaging in order to assess the extent of the damage and provide Bill with the complete picture of what the team could do for Nell.

The results revealed the worrying extent of the damage to Nell’s pelvis. The left side was badly fractured and the left hip socket had been blown apart, and when it got smashed, the back end of the pelvis had broken in several pieces, some of which imploded into the pelvic canal. As a result, it would not be possible to give Nell a commercially available hip cup because there was not enough remaining pelvic bone to support it.  So the only way would be to make a custom cup unique to Nell.  Noel reminded Bill that even that would carry risks and success would depend on biology smiling down on them. 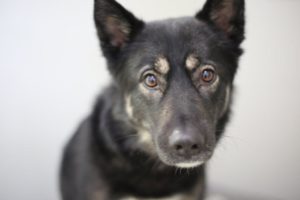 For Bill it was easy, he wanted the best for his friend and asked Noel to go ahead with the surgery.  Noel designed the cup especially for Nell with the help of specialist engineers to replace the head and neck of Nell’s femur bone.  Once the unique cup had been manufactured, Noel took Nell to surgery and two hours later the operation was complete and the radiographs looked promising.

Unfortunately, just 48 hours following the surgery the new hip dislocated. This was a massive blow to Bill and the team. Sometimes despite everyone’s best efforts biology has its own ideas.

A new solution was needed, so Noel went back to the drawing board with the engineers and designed and manufactured a revised cup that would hopefully keep Nell’s hip joint in place and give her the quality of life they were all striving for.

Nell had a long and difficult journey following her second operation, which included an intense course of physiotherapy and hydrotherapy to re-teach her to use her new limb and strengthen her chronically under-used muscles. She remained hospitalised and under the care of the team to ensure everything was done to ensure she was in no pain and suffered no further setbacks.

After a few weeks, Nell was allowed to go home with Bill and continued her intensive physiotherapy and hydrotherapy course as an outpatient.  Bill was fully committed to Nell’s recovery and over the following weeks she improved little by little every day. For Bill the journey was worth it, because of the unconditional love he receives from Nell every day is irreplaceable.