10 month old Jack Russell/King Charles Spaniel Snoopy has been run over by a delivery van and his foot is  hanging by a thread. Vet Padraig, one of Noel’s closest colleagues, rushes to pick up Snoopy as his owner Carole is unwell herself with bowel cancer and time is of the essence. Snoopy’s foot is unsalvageable- but Noel thinks he may be able to give Snoopy a working leg back, by fitting a custom-made prosthetic foot attached to his skeleton inside the skin. It will be a far from straight forward procedure though, and the level of trauma and infection caused by the accident means Noel is unsure if Snoopy’s leg will recover. 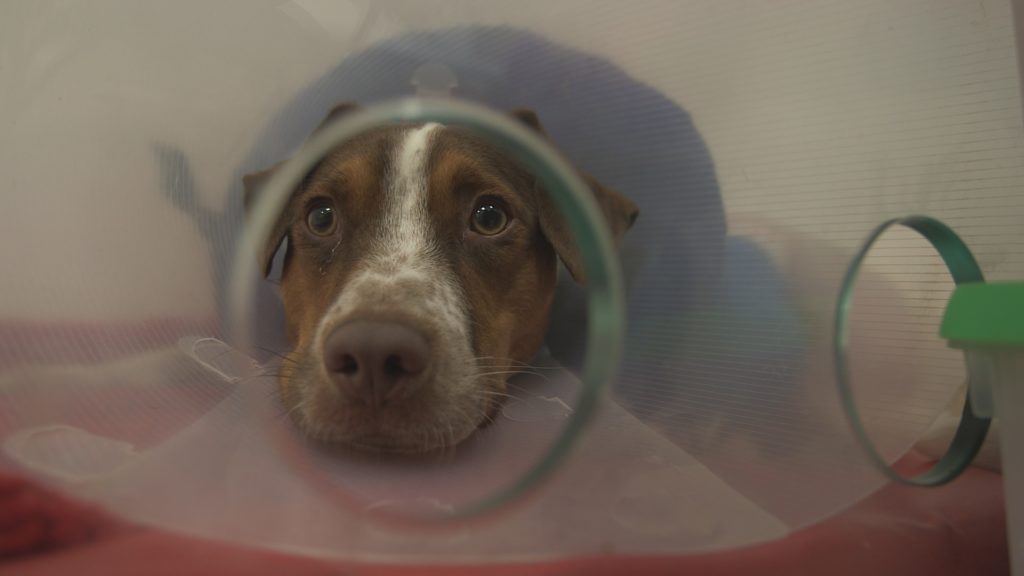 Snoopy, a beautiful and young Jack Russell/King Charles Spaniel cross, was accidentally hit by a delivery van outside his home one day. One of Snoopy’s back legs was seriously damaged in the incident, and his local vet knew that Snoopy’s foot could not be saved completely, but he wanted to try and do everything he could to keep Snoopy running around on four legs. This young dog had his whole life ahead of him.

This was when Snoopy’s vet called upon the help of Noel and the team at Fitzpatrick Referrals as he was aware that Noel had carried out a number of surgeries to salvage the legs of dogs and cats in the past.

After seeing the pictures and x-rays of Snoopy’s injuries, Noel felt he could offer Snoopy an amputation prosthesis which would allow him to run around with a prosthetic foot.

However, with Snoopy’s mum Carole undergoing chemotherapy, there was no way to get Snoopy to the clinic. Noel called upon surgical resident, Padraig, to go and collect Snoopy and after a four hour round trip Carole and Snoopy arrived at the clinic.

Noel discussed everything with Carole, putting her mind at ease and explaining that before surgery could go ahead he would have to get a full understanding of what was happening with his injured foot.

Snoopy was anaesthetised and his bandage removed. Noel instantly understood why Snoopy’s vet had decided that the foot was beyond saving, the foot was being held on by only a small amount of skin and the damage was so extensive there was no hope of salvaging it.

Noel proceeded to amputate what little tissue was holding Snoopy’s foot in place and placed a bandage over his injured limb before sending Snoopy for a full CT scan of his leg.

Noel felt that Snoopy was a good candidate for a limb salvage surgery, using an implant called a PerFITS. This specially designed implant would be placed into Snoopy’s leg bone and become part of his body, as bone and skin grow into the metal – integrating the implant with Snoopy’s bone. For more information about this incredible procedure, please visit the Fitzpatrick Referrals website.

When Snoopy’s stump healed two weeks later, Noel was ready to take Snoopy to theatre to implant the PerFITS device into his remaining ankle bones.

Surgery went according to plan and Snoopy had an uneventful recovery from anaesthesia. However, it was clear after the first few days that everything was not as it should be. The ligaments that supported Snoopy’s ankle were beginning to fray as he began to bear weight and although the PerFITS device was healing beautifully, Noel had to make the tough decision to operate again on Snoopy and implant the PerFITS higher up the leg.  Snoopy was taken to theatre and the damaged ankle was amputated, and a second PerFITS was implanted into his tibia bone. 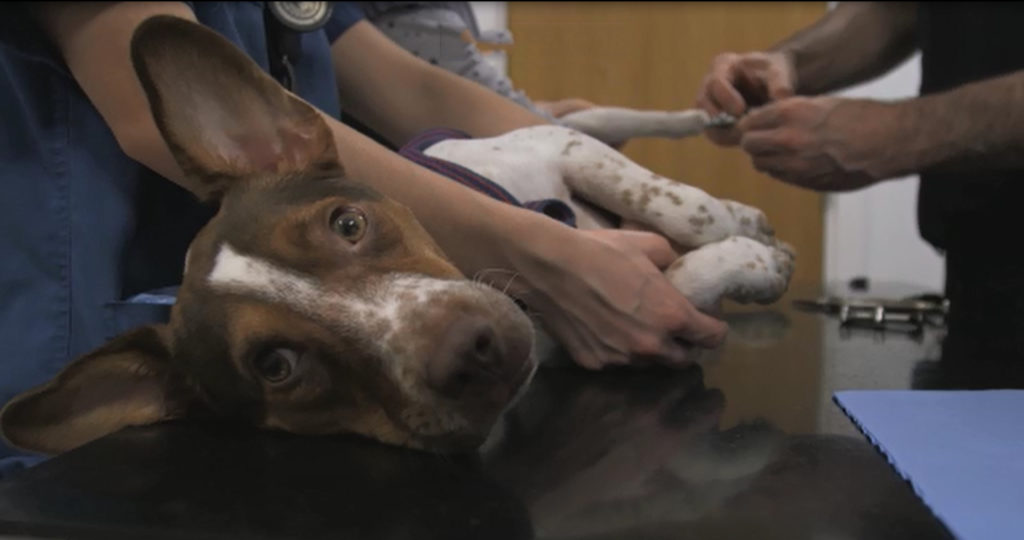 Snoopy’s wonderful personality shone through once more as he bounced back and began using his new leg amazingly well so soon after surgery, proving once again how incredibly resilient our animal friends can be in the face of adversity.

Once Snoopy’s skin had healed to the PerFITS implant completely, he was introduced to the team of medical engineers who closely examined the way Snoopy walked, which would enable them to design an exoprosthesis that attached to his PerFITS implant and ultimately act as a foot for him to walk on.

Once the exoprosthesis was ready it was time to teach Snoopy how to walk with his very special foot! Over the next few weeks he learnt to run around like a normal fully functioning dog, and continues to thrive.

Snoopy has a special place in my heart because he is such a wonderful joyous little dog and also because his mum Carole was going through so much herself with her cancer treatment and his companionship means so much to her.

It’s true to say that as technology advances, it becomes possible to do almost anything. Progress is inevitable and with this progress comes a moral responsibility to do the very best we can for our loyal and loving companions. Each individual animal and each set of circumstances are unique and it’s important that we always look after the best interests of the animal and the welfare of that particular animal in those particular circumstances. It’s not enough to be able to do something. It must be morally the right thing to do.

It’s always a tough decision to decide what to do after a major trauma like Snoopy’s. It’s even harder to deal with complications as a surgeon. Yet, as a surgeon this is part of real life day in and day out as there are no procedures that have no potential complications. I’m so glad that it’s worked out for Snoopy. He’s such a young and sprightly fellow, with such a spring in his step, that it’s deep joy for me to be able to see him running along with Carole.

In his story comes hope and redemption for all of us. For myself, Carole, all my team and of course animals and humans everywhere. The technology for limb amputation prostheses has now definitively arrived. It will become a common option for animals and for man in future years. My passion and vocation is to provide pain free functional quality of life to all animals entrusted to me and my team. The wider implications of this kind of technology is that dogs like Snoopy herald a new era of hope for amputees of all species.

The PerFiTS technology could revolutionise the lives of animals and humans – and it’s a reality today. It’s a brave new horizon that is no longer the demise if science fiction.

I have founded a charity called The Humanimal Trust that will fund research in clinically relevant developments for animal and human healthcare with deep integrity and respect for all species at the same time. It is my dream that this charity will change the nature of the dialogue that needs to happen between vets and human doctors so that all species win. This is the concept of One Medicine and is in my view the only rational route forward for medicine. As we learn and develop new techniques in human or in animal patients, this should be shared for the greater good of all. If you want to find out more please visit The Humanimal Trust – and maybe get involved with some of our future events.
Thank you Snoopy for being such an amazing bundle of joy and for inspiring all of us to try to be the very best we can be. N x 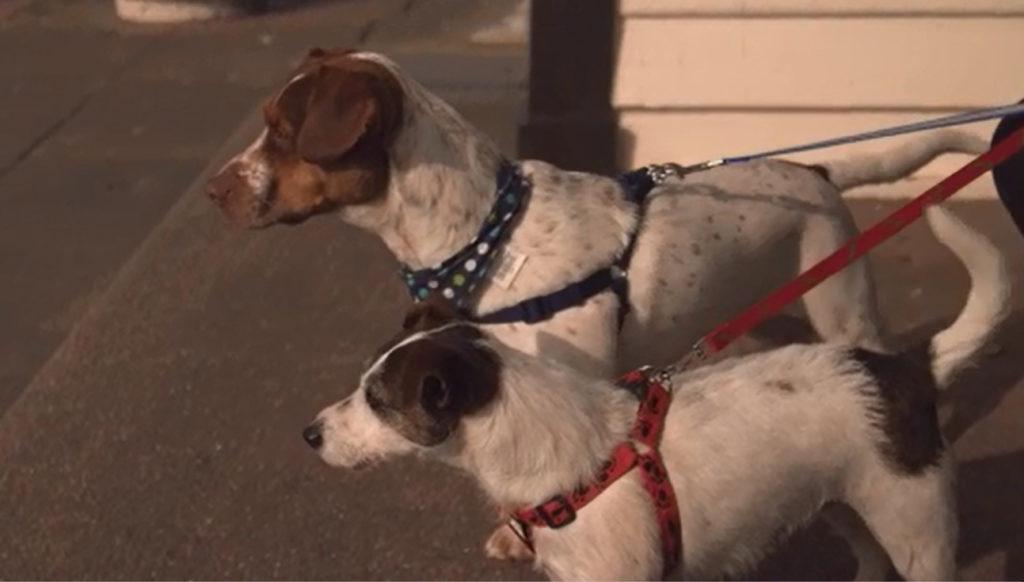